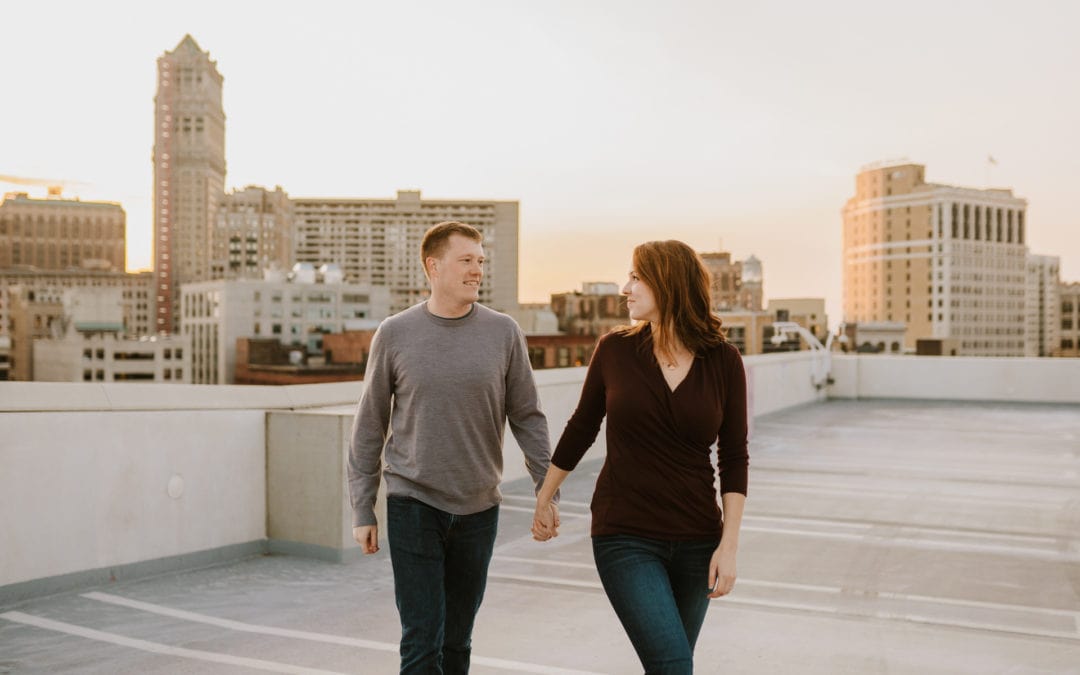 An iconic downtown Detroit engagement session location is The Belt, an alley filled with art, market lighting, and some cool bars you can duck into for an after session date. The Belt is a really popular spot to end a Detroit engagement session because the lights photograph so beautifully. Located just steps away from Woodward Avenue, The Belt is a quick stop and great for those who love art and bright colors.

This hidden gem, the Dequindre Cut is a bike and walking path leading from the Riverfront in the Warehouse District to Eastern Market. You could spend an entire engagement session on the cut, but I suggest pairing it with Eastern Market to give you some variety. The Dequindre Cut is great for a grungier, more graffiti loving couple. It’s not highly trafficked with photographers, making it a hidden Detroit engagement session location gem (shhhh don’t tell everyone, okay?)!

Everyone in Detroit knows about the magical island Belle Isle, with is stunning conservatory and perfect sunset skyline views. Belle Isle is truly a gorgeous Detroit engagement session location. Requiring a permit for use, I think it’s 100% worth it because the island gives you so much to explore. From a large marble fountain to the conservatory to a historic casino to willow trees and Japanese-style bridges to beaches, you have so many options.

Much overlooked, the Warehouse District is still gentrifying and still has a little bit of the old, rundown, rough and tumble Detroit. I can’t tell you exact locations to use, but the Warehouse District runs along the riverfront. With cobblestone streets, a perfect shot of the Renaissance Center, and lots of rundown buildings with ivy, its not-polished nature is perfect for casual couples. Atwater Brewery is also a great stop if you’re into their beers. The Vanilla Java Porter is famously my favorite.

Heading up to mid-town, the Detroit Institute of Arts and Detroit Public Library are across the street from each other. One is more popular than the other (take a wild guess), but both are marble buildings with lots of character. I happen to enjoy using the blossoming trees around them in the spring and summer. Though you can’t head inside the DIA (you can at the library with prior permission), outdoors is perfect for a more elegant Detroit engagement session location. There are some ground rules about the steps at the DIA, but plan to come in the morning before opening (preferably on a Sunday) and you’ll find the entire place deserted.

Another hidden gem (in my opinion) for those that want to use two Detroit engagement session locations but want nature and don’t want to head all the way to Belle Isle is Palmer Park. Located in the north side of town, closer to the Ferndale border and the Detroit Golf Club, Palmer Park offers a large field, an abandoned fountain, and honestly a beautiful golden hour. Almost no one bothers to use Palmer Park for engagement photos and I can’t figure out why. The tall grass, trees, and look of a field are highly sought after in the suburbs.

Corktown has changed in recent years, especially with Ford Motor Company’s purchase of the old Michigan Central Station. There once was a time where photographing the abandoned station seemed edgy but not anymore. Either way, Corktown’s cobblestone street, fun restaurants and bars, and neighborhood vibes are perfect for laid back couples. Corktown isn’t as popular as downtown or Eastern Market when it comes to Detroit engagement session locations, but that doesn’t mean it’s any less amazing. Head down to the West Riverfront Park at the end of your session for a perfect view of the Ambassador Bridge.

The Detroit Riverfront is very long and the Riverwalk functions as a bike, walking and running path. It can get a little busy during the summer. But along the way, you can get beautiful views of the Renaissance Center, the Detroit Princess riverboat, and the Ambassador Bridge. If you make a quick stop at Hart Plaza, you can grab some engagement photos with the art in that area or head right up Woodward Avenue for more photos.

Greektown, adjacent to downtown, is a fun, colorful place for engagement photos in Detroit. The market lights are similar to the Belt but hang over a road filled with colorful shops and restaurants.

As many head to Campus Martias, instead sneak over to Capitol Park, which is a small little park off of Griswold with beautiful lights, a Christmas tree lot during the holidays, and perfect views down Griswold of the Guardian Building. It’s usually less crowded than Campus Martias during the busy holiday season, making it perfect for a winter downtown Detroit engagement session.

I know, I have to mention it, but Campus Martias is really a picturesque Detroit engagement session location during the holidays. All of the light displays, the huge Christmas tree, and the skating rink really do make it so beautiful for a winter engagement session. It can get crowded so if you are nervous around people, it’s not recommended or try for a weekday session.

Behind the new Shinola Hotel lies Parker’s Alley, similar to The Belt but more modern. You won’t find a ton of murals here, but lots of brick and a modern feel. Stop in at Madcap Coffee if you two are coffee lovers for a drink during your engagement session.

For art lovers, visit the Cass Avenue Viaduct for a bright backdrop and beautiful golden hour light. Location on Cass Avenue in New Center, just down the street from the Fisher Building, the viaduct is a great stop but try not to park illegally (parking is a little weird in this location). As for Detroit engagement session locations, this is a great spot for rainy day engagement sessions since indoor locations in Detroit are dwindling.

When you have so many options, it’s hard to decide where to go! The important thing is to choose not the “coolest” location but the location that you identify with the most. If you’re planning a Detroit engagement session, get in touch with me!